All About The Daisy Duck Character

Daisy Duck is a cartoon character created in 1940 by Walt Disney Productions, and she was created to be Donald Duck’s girlfriend.

She is an anthropomorphic white duck with long eyelashes, indigo eye shadow and ruffled tail feathers which are supposed to suggest a skirt. 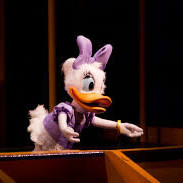 Her signature costume is a hair bow, blouse with puffy sleeves and heeled shoes. The colors of her clothes often change, but she normally prefers purple and pink.

Daisy Duck is often depicted as being more sophisticated than Donald Duck and goes on dates with Gladsonte Gander whenever she becomes frustrated with Donald’s immaturity.

Daisy first stared in the short film Mr. Duck Steps Out and was incorporated into Donald’s cartoons several months later. She appeared in 11 short films between 1940 and 1954 and then again in 1983 in Mickey’s Christmas Carol and Fantasia in 2000.

The Daisy Duck Character is always as a supporting character but she did get a great part in Donald’s Dilemma in 1947. 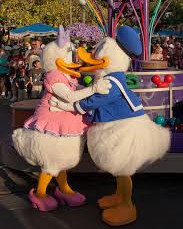 She has been luckier on television as she made regular appearances in Quack Pack, Mickey Mouse Works, Disney’s House of Mouse, Mickey Mouse Clubhouse and Mickey and The Roadster Racers.

Daisy is an aunt to April, May and June who are young female ducks with a strong resemblance to Donalds nephews Huey, Dewey and Louie.

When Daisy Duck performed in Quack Pack, she was reworked into a career woman and she got a different appearance with longer dresses and high-heeled shoes. The trademark bow got changed to feathers in a modern short hairstyle. 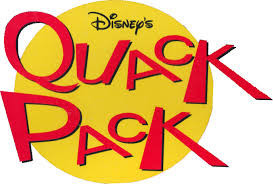 During House of Mouse she got a blue and purple employee uniform with a blue bow and a long ponytail.

In Mickey Mouse Clubhouse Daisy got her purple blouse and purple bow back. She also wears a gold bangle, shoes and has a short ponytail.

Who Does The Daisy Duck Character Voice?

Daisy Duck has been voiced by several voice actors over the years, yet by far the most extensive work has been done by Tress MacNeille, who took on the role in 1999.

Gloria Blondell took over from 1945 to 1947 and gave her a more normal female human voice.

Ruth Clifford who was best known for her Minnie Mouse voiced Daisy next before Blondell returned to the role one more time in Crazy Over Daisy in 1950.

Who Was Donna Duck

Rumor has it that Daisy was introduced in 1937 as Donna Duck, yet there is conflicting evidence whether Donna was an early version of Daisy or a separate character entirely. 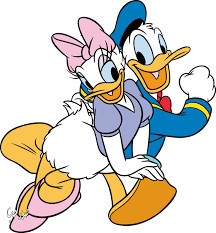 Donna’s identification as an early Daisy is aided by the fact that other Disney characters, such as Goofy, were also introduced under different names (Dippy Dawg), appearances, and mannerisms.

Donna in Italian is also the female equivalent of Don, the title Donald takes in the film’s title. In 1999, Walt Disney Company released a collector’s pin as part of their “Countdown to the Millennium” pin series, which reads “Daisy Duck debuts as Donna Duck 1937.

Daisy was born in 1920. According to Rosa, Daisy is the sister of Donald’s brother-in-law – Daisy’s brother had married Donald’s twin sister, Della Duck, who are the parents of Huey, Dewey and Louie. This is why the triplets call her Aunt Daisy.

Since the early 1970s, Daisy has been featured as a crime fighter in Italian Disney comics. The character of “Super Daisy” (“Paperinika” in Italian) was designed as a female counterpart to the “Duck Avenger.” While the character of the Duck Avenger was originally created to place Donald into situations where he was finally a “winner” (versus his usual portrayal as a “loser”), when Super Daisy appeared in the same story as the Duck Avenger, she then became the “winner” and Donald was once more relegated to the role of “loser”.

This upset some children, who complained to the comics’ editors, which resulted in the Italian comics ceasing to use Super Daisy, though the Brazil Disney comics continue to make use of Daisy’s superhero alter ego.

As Super Daisy, Daisy has no superpowers but instead uses devices created by high society fashion designer Genialina Edy Son. Genialina personally designed Daisy’s costume, as well as supplying her with crime-fighting gear such as sleeping pills and a James Bond Sports Car.

While the Duck Avenger’s main goal is enforcing justice in Duckburg, and proving himself better than his usual, unlucky self, Super Daisy acts mostly on an extreme, somewhat warped form of feminism, donning her alternate identity to prove that women are better than men at whatever they do, openly antagonizing the Duck Avenger to prove her point.

Here are some great Daisy Duck Character items that you can order online at great prices.

These are great to build onto your Daisy Duck Costume.

Now all you need is a puffy blouse.

This one isn’t a Daisy Duck Character costume, but the kids will love this tee shirt with both Minnie and Daisy having some fun.

Hope you have enjoyed reading all about the Disney Daisy Duck Character.

Please note that this post does contain affiliate links. 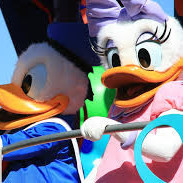 Mickey Mouse Toys You Will Love Disney Frozen Characters – Why The World Loves Them